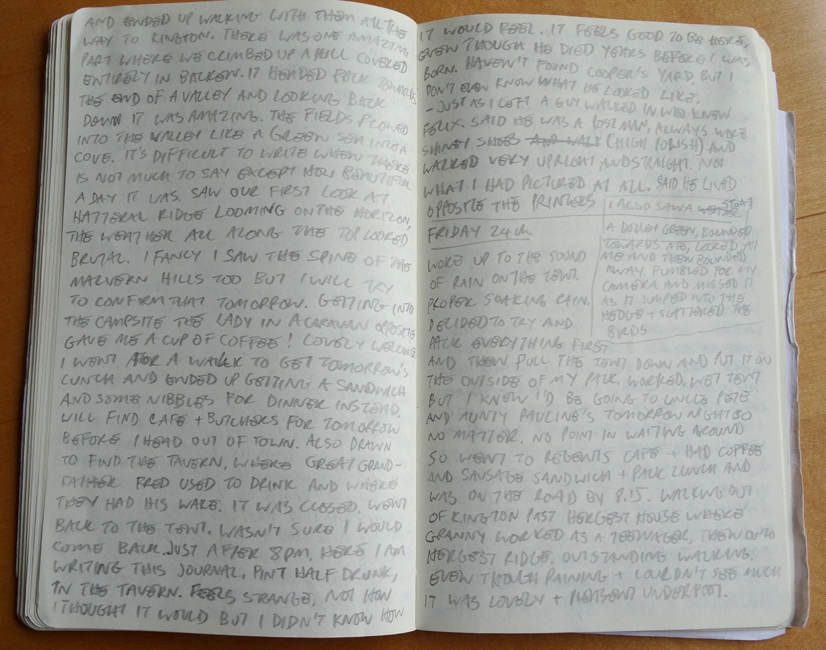 Tues 14th
Prestatyn. Camping in beautiful flowery garden. Water feature burbling away. Went down to seafront to start the walk. Had fish and chips which I’d finished by the time I got there. I think I like the wind farms. Odd place. Not as horrible as I was expecting, but devoid of all romance. I had a pint of West Coast Pale Ale. Bar tender like a fairy or sylph. Now reading and there is a teenage party next door. Earlier was loud music, now chatting and occasional shouts and cries. Hilarious. Sunset looks amazing. Half wish I’d gone down to beach but sure it would have been disappointing. Sartorius hurts. Will dose up tomorrow.

Weds 15th
Up at 7 for shower. Breakfast at Plas Ifan lovely. Talked to couple who had walked path 3 yrs ago. They were going to Hay soon. Set off at 9.05. Pretty steep coming out of Pres. Kept looking back for the sea and kept seeing it! Farming country, a bit up and down, lots of sheep and some cows, saw a frog. Weather beautiful, clouds like sheep. Rolling countryside should give way to hills tomorrow. Nice campsite. Everyone on path going opp. direction to me!

Thursday 16th
Was pretty glad to get out of Bodfari. broke camp at 9 after leisurely coffees. Pub was shit. Downing Arms. Locals very starey and gossipy and then one guy started complaining about ragheads being everywhere. Anyway - strimmer on the other side of fence at 7.45 so good thing I was up. Walk started gently and got into stoney path w/ old trees. Hill fort was amazing. Not a soul around. Took the detour up Mol Arthur and there was a cairn - cairns every where I was in Heaven! Some very steep climbs - Almost clambering. Lunch @ Jubilee Tower, feeling behind and exhausted. Much like Malvern Hills but on steroids. Down from there, loads of people. At Clwyd Gate had to climb up again. Much higher and further than expected, nice little dog said hello. Lots of sheep. Weird not often used path behind strange houses and around hill to get to campsite - Hills Have Eyes. Camping near fishing lake. Horses, piebald and shetland in next field, friendly but of course means flies! Exhausted, hurt all over. Hip was bad today. Foot blister size of 2 50ps! Windy. Wolfed down noodles and had shower. Do not expect to leave tent!

Fri 17th
Rained overnight so tent was wet. Got going early as poss but after faffing it was 8.45 by the time I hit the trail. Going was easy - Fields, leaving hills behind. After Llandegla (?) into forest past studios. Got a little lost at one point, but I guess that is what forests do. All conifers planted in rows. Uphill. Out onto open peat fen. Walking along railway sleepers until road takes you down to world’s end. Very open and windy, body was in agony. Right side giving up all over the shop. Path follows under crags and scree slopes. Blue stone very dramatic. Descended on to road. Not seen buzzards or ravens. Lots of chilled brown faced sheep and lambs. Dinas Bran comes into sight. Really looks like a ruin on top of a conical hill from Lord of the Rings. Struggled into camp down lane towards Llangollen, very friendly and well equipt. Town very sweet. Lots of pubs and butchers. V. nice sausage bap and chilli garlic sausage roll. Bought walking poles because pain in right side. Washed clothes, really windy but not drying. Ate Co-op chicken and cucumber and toms for dinner! Kate arrived at 10pm!

Sat 18th
Set off about 9.30 after coffee and cheese bread from Co-op. Back onto path and then through woods (deciduous turning to coniferous) where there were very mossy walls. Looked old and peaceful. Kate kept finding rubbish. Stopped at aqueduct for coffee and welsh cakes. Walk over A.D. was amazing huge drop, great views. Lots of walkers about (day trippers) - Telford designed. Walked along the footpath, great to have someone to chat to. Along canal the up through farmland and past Chirk Castle. Very ancient oaks around path, some cut into by road, steep walk up from Castle Mill where finally join actual Dyke. Kate scared of horses and cows. Plenty of both. More very old stone walls and boulders. Dropped bags and went off path little to see burial mound. Stayed at Carreg-y-Big equestrian centre. Kate called ahead and got us on sofas of rec room. Very grateful as rained in night, at times heavy! Knee now hurting more than ever. Thank God for walking sticks!

Sun19th Met Ian - Owner of Carreg-y-big. Thanked him and paid
Rain and Clouds cleared quickly and the day was sunny and fresh after the rain. Walking we met several Sunday strolling locals on Racecourse Common saying how lucky we were with the weather. Descend through wooded paths to beautiful hamlet Ty’n-y-coed. 7 Bedroom house for sale with barn - looks like owned by ceramicist for studios. Want. Just following signs rather than constantly reading book. Trefonen village shop amazing. Had pasties and cookies and coffee in mugs (pasty for later, pork pie for brekkie). Open hill summit with compass/direction plaque thing. Like Malvern. House on way down sells magnums. See disused farm buildings and cottages straight out of my work. Stopped on a bench overlooking Nant-Mawr. Such a pretty spot. Head up towards treeline of massive wood. Grinning, feels like wind in the willows, Ratty and Mole walking into wild wood. Path steep, and then onto Dyke high up. Path follows Dyke across onto golf course and then down below cliffs. Stop to eat Pasty. Don’t see peregrine F. Look at old ruined quarry w/buildings and down into Llaymynech past wall where Darwin measured mudstone! Beautiful red brick house overlooking valley. Ornate porch. Stopped for a couple of pints at Bradford arms then walked canal to Four Crosses. Many beautiful houses, new and old. River Vyrnwy. Kate collected car outside Golden Lion and I set up tent for night. Said Bye. Waited until then opened at 7. Had 2 bitters and sausage, egg, chips. Full. Bit squiggly. Asian vet student also there, and guy w/lots of tats. Owner big old school rock fan. Deep velvet live tape playing whole time.
______________________________________________________________________________

Mon 20th
Woke pretty early. Right leg in lots of pain at night. Dusting of rain on tent but ground dry. Went to get brekkie and coffee at Costcutter. Friendly little dog (there have been lots of friendly dogs) was very hesitant about the path at points. Through milk depot and into estate, then across farm. Kid in overalls told me where to go. “Don’t worry about the tups.” Walked along Dyke through farmland, dead flat. Lots of livestock challenges. Big boy sheep, could walk past. Curious cows had to shoo a bit. Then onto embankment by Severn. Lots of livestock and poo! Boots got heavy and started to rain hard and continuous, bullocks not moving, walked around, later. Mum cows and babies and bull in gateway and by bridge sheltering from rain wouldn’t move. Had to get over nettley bridge. Found Powis Arms pub open @ 11am! (Got the 11.20) great coffee, chilli and rice and naan. Chatted w/ Canadian lady going other way. (companion of older lady we spoke to the day before. Been ditched for slowness and not wild camping!) Rain had stopped so headed out onto canal and then across fields, went a little wrong a couple of times and long climb up to beacon ring. Field of corn before top was amazing with path cut through and windy - view spectacular. Hill fort was odd. Dense trees in centre, foreboding atmosphere. Path goes around anyway. Way down through forest. Managed conifers but also other trees on side of steep hill. Dark fishing pond, but later on Offa’s Pool all gone. Deep hole with vegetation. Then walk down country road and behind houses of Kingswood. Along main road and then fields along dyke to campsite. Dead on feet and slowing down. Bullocks being very inquisitive, near charging. Shoo’d them an hopped over stile they rushed straight up. Almost walk past camping - Meadow Rise, Forden. Had called earlier @ Buttington and booked bunk house! Have bunk to myself with amazing shower and can charge phone again. TV does work thank god. Washed socks, hope they dry! Finished reading Stardust and preview of other book. Made me sad. Saw red kite coming into Kingswood! Now tucked up happy! Do miss Kate, evening feels bit dull but I am thinking and writing and will sleep in a bed. I feel different. Maybe this trip is changing me.
________________________________________________________________________

Tues 21st
Started early feeling good. Raining but bunkhouse was only £10! As conditions bad realised I would have to go to Montgomery for food. Long grass on path had me with soaking socks straight away. Feet sodden all day. Montgomery very nice. Imagine regency costumed people could be wandering around. Stopped at Spa and got massive oggie and pork pie. Inhaled oggie straight away. Showers with a couple of sunny intervals. Long grass and narrow path made sticks difficult to use. Walk along dyke all way. Met a very nice farmer in his 70s who chatted a while. Saw pub w/ petrol pump and walk through fancy estate gates. Then started climbing up. Switchbacks were murder! High country so views as rolling hills but up and down, following dyke on serious terrain. Realised that it always has the oldest trees on it. Thought sign saying 2 3/4 miles to Newcastle was a joke. Felt even further, was really plodding by time got up to high hill and saw half way sign! 88 1/2 miles each way! Such a boost. In campsite in Newcastle on Clun. Compeed blister plasters came off. It is huge and looks like an oyster shell. Re-applied. Hope they last until Kington where there is another pharmacy. Only person in campsite again! (although met 2 guys - Father/son? - Travelling same Direction and same time as me, first time I’ve seen them) apparently there is a fox about so food away in washup area. Off to pub for dinner. Very blustery little village in valley. Very tired but getting used to that. Short day tomorrow but very undulating again. Hope for better weather.

On facebook I have posted a portion of the photos I took on the path. You can view them even if you aren't on facebook.

I've been away for a couple of weeks walking the Offa's Dyke path. Stretching 177 miles along the English and Welsh...